“At first I thought it was going to be the usual charity type event with talks about how and where the donation money was used, but by the end of the day it had become so much more.

In my usual conference behaviour I sought to find some unsuspecting person to chat to and alleviate networking nerves, which in this instance turned out to be Jane Leahy and her sister Claire. 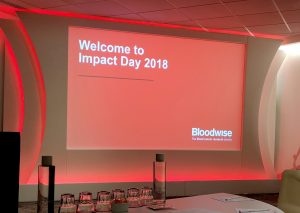 We discussed the usual networking conversation topics such as “travel” “what’s happening today” “when will it start”, but when it came to explaining our relationship to Bloodwise things were different to the norm. It turned out that Jane was a Bloodwise ambassador and had overcome AML, however “overcome” was a very poor assumption to make as I later learned when she discussed her experience with AML. Both Jane and Claire were extremely friendly, knowledgeable and happy for me to join them at the event and we discussed various different charity ideas. They also informed me of the stem cell register that almost anyone can apply to be a part of and they were also quick to clear up many  misconceptions regarding donations such as the fear of it being too invasive and painful, which isn’t true for the vast majority of donations.

After the initial pleasantries, we made our way into the meeting room. Where Rohan Putter, Director of Marketing and Events at Bloodwise, held the introduction the event and then kicked things off with asking us what our Bloodwise highlights of the year so far. There were some great stories, such as a  lemonade stand setup by children and ex blood cancer patients sharing the news of their friends going into remission. In this segment I decided to share a bit about what Clinical Professionals have been doing and I mentioned the Bloodwise segment at our AGM. As for me personally this helped make the charity work worthwhile, not only having the company come together in support after seeing Suzi’s video but also for already reaching 75% of our fundraising target. I also elaborated on who and how Bloodwise holds particular significance to us. I shared some examples of our fundraising events such as head shaving and Easter egg hunt which garnered a few laughs from other attendees.

The next part of the event featured a talk from Jane, who spoke about her condition and how it began as what she thought was an infected tooth, combined with stress from starting a new job (something which I’m sure is a familiar feeling to us all). After a dentist, GP appointment and a blood test, it turned out she in fact had AML, after a lengthy battle and going into remission twice, she successfully fought off her condition with the assistance of her sisters stem cell donation, a truly inspiring story.

Even though Jane was diagnosed as in remission, like many other blood cancer patients, she isn’t “cancer free”. Like others, I had assumed that when you are in remission, that’s it, you’re done and essentially cured. What I wasn’t aware of was the aftermath people like Jane would continue to endure. Not only is there a chance for the cancer to return, and for some people that is a sure thing, but Jane for instance will have to take various pills every day to manage her condition, many of which have some nasty side effects.

I have to admit, it was hard to hear Jane talk, especially after talking to her beforehand. You could easily tell that her experience still affects her a lot emotionally, I had no idea of what she had endured till she talked, and seeing her sister next to me trying to keep composure, it was clear they were reliving an awful time in both their lives. And that this event meant a lot to them.

It’s moments like this that help you realise how important the charity work CP do and the effect it can have on people. Especially after I heard a woman from the group discuss how she is having trouble adopting due to technically still living with cancer and isn’t “cancer free” . Although in remission for a few years, her condition will return and how this affects her chances of adoption. Much like Jane she will be living a life of daily drug regime and dealing with their side effects.

The event as a whole was incredibly eye opening. 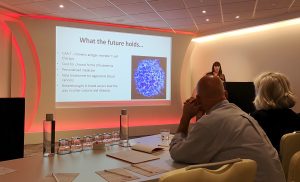 There were a few talks from researchers including Professor Irene Roberts regarding current research and what they hoped to do in the future.

Although Bloodwise focuses on blood cancers, it was interesting to hear how their pioneering research has progressed over the years. The most recent of which has be the use of CAR-T therapy and looking to create personalised treatments.

Jacqui-Ann Hanley, Research Funding Manager, also mentioned that Bloodwise collaborates with other blood cancer research charities to help advance breakthroughs, she also noted that quite often blood cancer research helps pave the way for other cancer treatments, partly due to having easier access to cancer cells without invasive procedures to the patient.

Professor Irene Roberts then shed some more light into some of Bloodwise’s research, in particular treating and finding the cause of Leukaemia in children with Down Syndrome. In addition to being the chair of the clinical trials committee at Bloodwise, Professor Roberts also works at the MRC and University of Oxford.

During the breaks, I also had a few interesting discussions with some of the Bloodwise employees who we could collaborate with in the future on some ‘back to work” advice packs for cancer patients. I feel this would be a great opportunity as I heard from others in attendance, that the idea of going back to work can be incredibly daunting and many suffer from a lack of confidence.

There was also someone who asked for our company details as their daughter is finishing a biochemistry PhD and wants to know their job prospects. Gotta love a bit of networking 🙂

Everything I learnt at the event has helped highlight the importance of our fundraising, and how key all of the research really is in making a difference to people’s lives.

I will be looking to put myself on the stem cell register, if anyone is interested, please let me know. All it takes is a mouth swab and the process itself is similar to a blood donation.

And keep an eye out for other fundraising events in the future!”

Some of the employees at the Clinical Professionals Group will be taking part in the Windsor & Eton Autumn Classic Duathlon, if you wish to contribute to the £1k target, you can donate by clicking the link below: