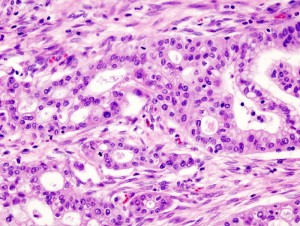 A report has stated that a nanoparticle drug-delivery system that combines two complementary types of anticancer treatment could improve outcomes for patients with pancreatic cancer and other highly treatment-resistant tumours whilst decreasing toxicity. In their report that has received advance online publication in Nature Nanotechnology, a research team based at the Wellman Center for Photomedicine at Massachusetts General Hospital (MGH) describes how a nanomedicine that combines photodynamic therapy – the use of light to trigger a chemical reaction – with a molecular therapy drug targeted against common treatment resistance pathways reduced a thousand-fold the dosage of the molecular therapy drug necessary to suppress tumour progression and metastatic outgrowth in an animal model.

Photodynamic therapy (PDT), involves the use of chemicals called photosensitizers that are activated when exposed to specific wavelengths of light to release reactive molecules that can damage nearby cells. In cancer treatment, PDT damages both tumour cells and their blood supply, directly killing some tumour cells and starving those that remain of nutrients. But as with many other types of treatments, treating tumours with PDT can stimulate molecular signalling pathways that support tumour survival.

The nanomedicine developed by the Wellman-based team is made up of nanoliposomes – spherical lipid membrane structures – enclosing a polymer nanoparticle that has been loaded with a targeted molecular therapy drug. The lipid membrane of these photoactivable multi-inhibitor nanoliposomes (PMILs) contains a FDA-approved photosensitizer called BPD (benzoporphyrin derivative), and the nanoparticles are loaded with a molecular therapy drug called XL184 or cabozantinib. XL184 inhibits two important treatment escape pathways, VEGF and MET, but while it has FDA approval to treat thyroid cancer and is being tested against pancreatic cancer and several other tumours, it is quite toxic requiring dose restrictions or treatment interruption. Since XL184 is delivered to every part of the body and not just to the tumour when administered orally, enclosing it in the PMIL could reduce toxicity by confining its activity to the area of the tumour.

Led by Tayyaba Hasan, PhD, of the Wellman Center, the investigators first confirmed in laboratory experiments that exposing PMILs to near-infrared light both activated the antitumor action of BPD and, by disrupting the lipid membrane envelope, released the XL184-containing nanoparticles. In two mouse models of pancreatic cancer, a single treatment consisting of intravenous delivery of the PMILs followed by localized delivery of near-infrared light to the tumor site via optical fibers resulted in significantly greater reduction in tumor size than did either treatment with XL184 or PDT with BPD alone. PMIL treatment also was significantly more effective than treatment with both XL184 and BPD-PDT given as separate agents. Along with prolonged tumor reduction, PMIL treatment also almost completely suppressed metastasis in the mouse models.

While the VEGF treatment escape pathway is known to be induced and sensitized by PDT, the research team found that PDT also induces signaling via the MET pathway. The ability to deliver XL184 and PDT almost simultaneously allowed the two therapeutics to be “at the right place at the right time” to cut off the rapid initiation of escape signaling that usually follows PDT. This was reflected in how much more efficient PMIL-delivered treatment was in the animal models compared to either treatment alone, since PDT simultaneously sensitized the tumor to the second therapy. Delivery of XL184 directly to the tumor site produced these promising results at a dosage level less than one thousandth of what is used in oral therapy, with little or no toxicity.